Ishan was an undergraduate student who didn’t like to see unfair things happening in the society. He lacked the tolerance especially when the innocent, uneducated people were being fooled or exploited.

One day he received a chat via Facebook Messenger from a girl in the US. Her chats in weird Sinhala language (like online translated to) were even funny. However, he wondered why an unknown woman was interested in chatting with him. To understand the scenario clearly, he pretended to be silly.

She introduced herself as an agent who helped people earn profits through investments on Bitcoins and suggested Ishan to start making money as per the instructions she was providing. 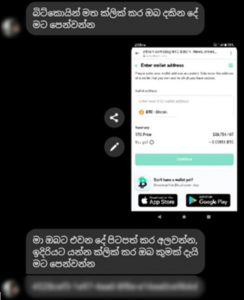 She sent him the link of bitcoin.com and asked him to show his screen. Then advised him to click on Buy BTC (Bitcoins) selecting US$1000. After that she sent a wallet address to get it copied and pasted on the relevant field. However, it showed an error of buying the Bitcoins on Ishan’s screen. At that point, she asked whether Ishan had a visa (bank) card. Finally, Ishan questioned why she needed his bank card for her wallet address and stopped chatting with rage.

Subsequently, Ishan decided to inform Hithawathi about this cryptocurrency scam in which the scammers attempt to get the money of those who are desperately looking for easy cash on the internet to scammers’ bitcoin wallets with keen deceptive stories. Hithawathi went through the chats carefully and reported the incident to Facebook. After a couple of days, he could find that the account had been removed. Moreover, Hithawathi appreciated him for identifying and sharing this scam which was a bit new to our country and promised to make the society aware of it through Real-time cases upon his request.