“If you need money, just inbox”

There was a school-leaver called Suneth, who was interested in going out and having fun with his friends but found no money to do so, as he was unemployed. He felt even guilty to ask for money from parents.

While Suneth was looking for easy jobs to earn money fast, he came across an amazing Facebook post that asked people to just inbox, if they needed cash. 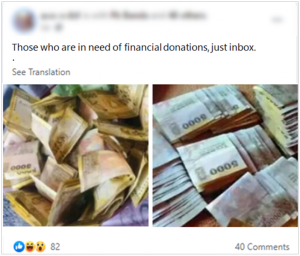 Suneth was a bit curious about this treasure. He messaged them to give it a try and understood that the person who was chatting romantically from the other side was a girl. She asked Suneth’s personal information like name, address and bank account number. After that she asked for both-sided photos of Suneth’s bank card in order to make a deposit of Rs.5000/-.

At this point, Suneth was rational enough to think why she needed photos of both sides of his ATM card to make a bank deposit when just the account number would do. He knew that the three letter code at the back of the card was very important when paying for stuff online; therefore, this should be a fraud aimed at stealing people’s money under the guise of donation.

Although Suneth was happy for being safe and free from the trapping, he wanted to save the poor guys who might be misled and even lose what they had in their cards. Moreover, Suneth realized that even their data could be misused for fraudulent activities, such as identity theft and duplication of ATM cards. Consequently he informed about this scam to Hithawathi help desk with relevant links and screenshots. Firstly Hithawathi reported the post directly to Facebook to be removed and as per his request, promised to keep the society aware of this type of scam. Suneth thanked Hithawathi for doing the needful to publish his story and Hithawathi appreciated him for bringing this content to their attention.