Threatening her to fulfil his needs 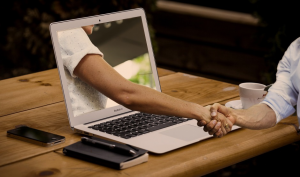 Darshi was a final year university student, who was specializing ‘Drama & Theatre’. Meanwhile, she was applying for jobs in the same field advertised on the internet, planning to join them as soon as she completed her degree.

One early morning, she found an email saying that,

She couldn’t remember that she applied for vacancies in this Company as she had applied for a lot by then. Anyway she thought that this would be a great opportunity during the time even some degree holders were unemployed. She was so happy and eager to contact them via Skype.

As requested by the Company, Darshi could get in touch with the interviewer, who was a lady and asked her to describe a bit about herself. Darshi felt quite comfortable with their approach and faced for that with confidence. The lady was very understanding and said that they could hold the position till she finished the degree, but some images of Darshi wearing stretched or transparent dresses were required to get approval from their top management to hold this position for her.

Darshi’s mind told her “Girl, don’t miss this chance”. Accordingly she decided to send some sexy images of hers to impress them and get the job confirmed. She started dreaming about being famous through this and then becoming a film star of high demand.

As soon as she sent them, she received a call from a Manager of the Company asking her to turn the video on and remove her top to scrutinize her actual beauty to proceed with the recruitment due to the fact that they got a lot of edited / fake photos sent by applicants.

This time without thinking twice Darshi said “I’m so sorry…I don’t feel comfortable to do it ”.

Darshi was totally blank and didn’t know what to do. She told the whole story to her best friend Achini, who quickly gave her the hotline of Hithawathi helpdesk. Darshi contacted Hithawathi and explained her issue. Hithawathi instructed her to skip further contacts with them and lodge a complaint to CID Social Media Unit via email, dir.cid@police.lk to investigate about these criminals. Moreover, Hithawathi asked Darshi to get back to them immediately if she found any of her images published on the internet so that Hithawathi could assist reporting and removing them.